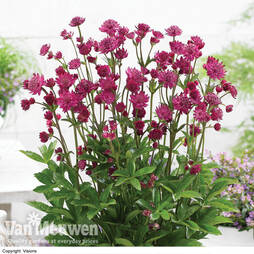 Astrantia major Censation™ 'Milano' is well suited to cottage garden and wildlife friendly garden borders, or in a pot on the patio or decking. It has attractive, raspberry pink flowers, on long stems. It is a good addition to a cutting garden, so the flowers can be used in home-made…  More Info 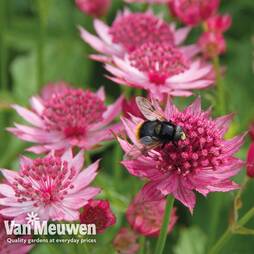 Plant hardy perennial Astrantia major ?Venice? in cottage garden borders or in the damp areas surrounding a pond and enjoy these stunning, ruby-red pincushion flowers all summer long. More vigorous than other varieties, these richly-coloured astrantia will thrive at the edge of woodland…  More Info 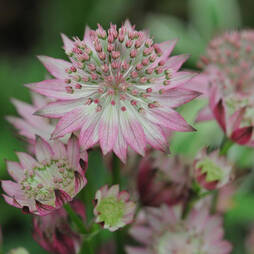 …foliage throughout the summer. Astrantia major ?Roma? has a longer flowering period than many other varieties and thrives in woodland gardens, beside ponds and streams or in damp garden borders. Masterwort also makes an interesting fresh or dried cut flower. Height: 75cm (30…  More Info